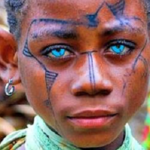 Who are the Melanesians? The Melanesian people live in an area in the South Pacific Ocean, that is just northeast of Australia. Countries in this region include Vanuatu, the Solomon Islands, Fiji, and Papua New Guinea, just to name a few.

A recent discovery has been made in researching the DNA of the Melanesian people. Traces of a previously unknown, long-extinct human species have been discovered and they aren’t who scientists thought they would be. Initially, when researching the Melanesian people, scientists believed that they would find out more information on Neanderthals or Denisovans — however, they found something different. Something, that up until this point, had been virtually unknown. There were potentially other species besides the Neanderthals or Denisovans that were not yet discovered.

There is still plenty of research to be done, but for now, it’s fascinating to know that another human species may be among us.