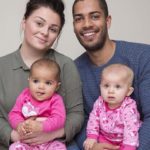 “Twins who look so different are very striking to the general public, but to a geneticist, it’s not really that weird,” says Janet Boughman, executive vice president of the American Society of Human Genetics.

Although black and white twins are very rare, there is a chance that they can become more common as the number of interracial couples grow.