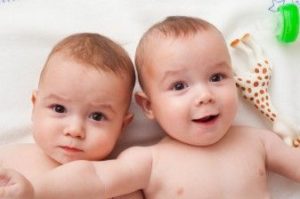 Do you want to know the truth about identical twins? Keep reading to find out five truths about twins. Perhaps you will learn a thing or two.

Truth One: Their parents can tell them apart.

We’re sure that from the back, it can be challenging to tell who is who – but when parents of twins are directly in front of their kiddos, it’s impossible to get them mixed up. They don’t have to remember what color which twin was wearing that day or even check for certain features that may tell the twins apart; they are their parent’s child and to them, they look entirely different. No confusion here!

Truth Two: They can have ESP.

Extrasensory perception, also known as ESP, is an ability to acquire information without relying on physical senses or previous experience. So – can twins really read each other’s minds?

While the ESP phenomenon is found to be more common in identical twins (because they share a closer genetic connection), fraternal twins can’t be excluded. Fraternal twins also often share a deep connection.

Sometimes it’s thought that twins may love each other more than they love their actual parents. Not to say that typical sibling rivalry doesn’t exist, but at the end of the day they remain bonded and extremely connected. They did share the womb after all.

Truth Four: Although they may be identical, they don’t look exactly alike.

Truth Five: They have their own language.

Did you know that 40% of twins have their own “secret” language? It’s called an autonomous language. When two children are both learning a language at the same time, they end up copying each other’s bad habits, thus creating their own language completely by accident.